This is Part II of our Thread Inspection 101 Series.

If you have been following along in our Thread Inspection 101 Series, you should now have a very solid foundation in the different attributes of a standard thread form. As you have seen, there are many different aspects that go into a quality machined thread.

As you can imagine, because of all these different aspects, an easy to use designation nomenclature system was needed to be developed. Of course, things can be as simple as having one system that covers the entire world, so two systems were created, one for the Imperial system and one for the Metric system.

The thread designation system that we use here in the US is the Imperial thread system. Other common names for this are "Standard", "English" or most commonly just simply "Inch".

All Imperial thread designations were consolidated to the Unified Thread Standard (UTS)in 1949 to ensure greater consistency among different manufacturers. This standard is maintained by ANSI.

Below is a breakdown of this designation system and its components:

The nominal diameter is the size used for easy identification of a thread. The number is the theoretical diameter from which the design size limits are derived by the application of tolerances and allowances. This number is essentially the nominal size of the major diameter of the thread.

Most often these sizes expressed in fractional values of an inch. However, some of the smaller size are designated by a one or two digit number. In all cases, the larger the number, the larger the size.

The next section describes the quantity of threads in an inch of the thread. This is discussed in length in Part II.

It bears noting that, in general, the smaller the nominal size, the higher the threads per inch count.

The next section describes the series of thread being described. There are numerous different series within the umbrella of the UTS, but all of those will start with "UN".

The last character (or characters) of this nomenclature describe the pitch of the thread, along with other uniquely identifying information. Some common series are:

This is the term used to designate the "tightness" of two mating components. This results from a combination of tolerances and allowances applied to the basic size of each component.

It is very important that these classes are specified to allow for interchangeability.

A visual representation of this concept is shown here: 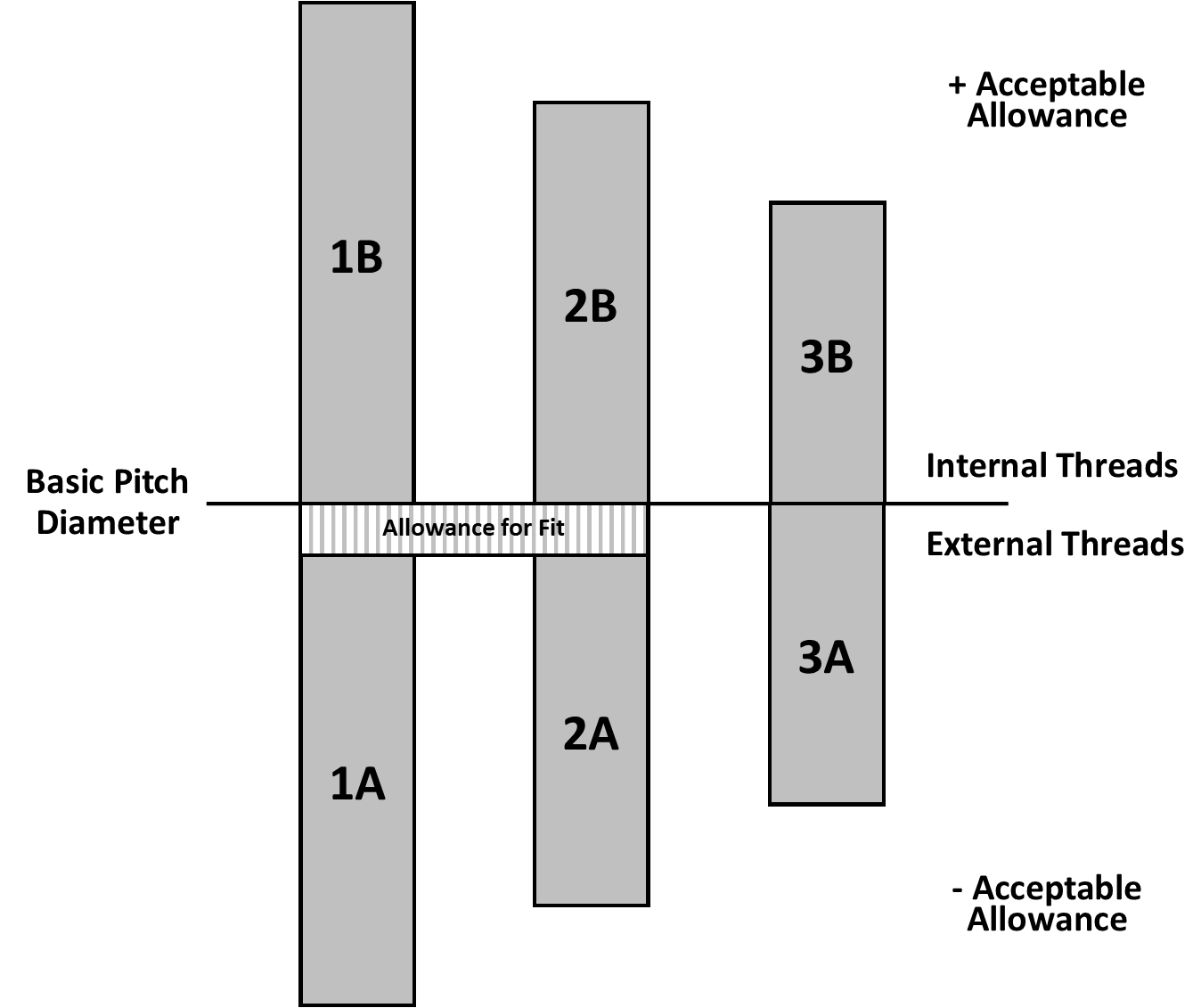 The thread type designation is a very simple one and has two options:

This last section for designation is rarely used, but still important. This is where any modification to the standard designation would be called out. For example, "LH" would denote a left-handed thread (no more righty-tighty, lefty-loosie!).

In Part IV of our Thread Inspection 101 series, we will explore the metric thread designation system and its intricacies.