This is Part VIII of our Thread Inspection 101 Series.

Now that we have learned all about the usage of thread rings, it is time to dive into how an adjustable ring gage is actually adjusted.

As a quick refresher, the most common type of adjustable thread ring is the American Gage Design (AGD) thread ring, shown here. 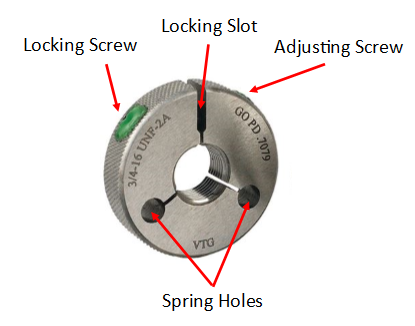 As discussed in Part VII, when any thread gage is used, ring or plug, you are rubbing metal against metal. Naturally, over time, the gage is going to wear down. What is interesting, is this wear will happen in the same spot pretty consistently over the life of the gage.

As seen here, this will create a scenario where the flank of the thread will actually have a "step" worn into it. The area that gets worn down is referred to as the "wear plane" of the gage. Unfortunately, when thread plugs get this, they cannot be adjusted and must be replaced. However, adjustable thread rings can, of course, be adjusted.

The inspection of a ring and subsequent adjustment is done with the assistance of a setting plug.

All of this works by threading the working ring onto what is called a setting (or "set") plug. The setting plug looks similar to a regular thread plug, but their usage is quite different. A setting plug is never to be used as a working plug for inspection of parts and components. It is only to be used to set and inspect thread rings.

Setting plug gages are manufactured without a plus or minus tolerance and represent the nominal size of the thread. 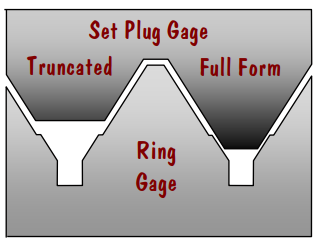 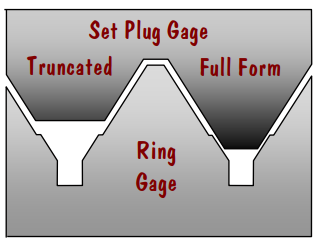 When a ring is checked on a setting plug, you will feel a noticeable difference in the tightness between the truncated and full form sections of the plug.

As mentioned previously, thread rings provide a unique advantage over their cousins, the thread plug, in that certain designs allow them to be adjusted. Obviously, over time, the ring is prone to being worn down. When this happens, luckily, replacement is not needed. Often times, the ring can simply be adjusted back to within tolerance.

The process for adjusting thread ring gages - as detailed by Vermont Gage, one of the foremost gage manufacturers in the world - is as follows:

When the ring gage is set to the setting plug with uniform feel over the entire length of the plug, including no end thread shake, it is correctly mated with the plug. However, it is well to remember that because of tolerances in the manufacture of both the ring and the setting plug, and that unless they are made at the same time or ordered to be mated with each other, allowances must be made in the assembly feel or fit to compensate for slight differences. For instance, a slight difference in angle and/or Lead cause more of a tightening or drag at full engagement than over partial engagements. This is not a serious condition as both the ring and setting plug may well be within specifications.

If the ring gage is set to the truncated portion of the setting plug first instead of the reverse procedure described above, and it fails to pass over the first full thread of the full form section of the plug, there is major diameter interference in the ring and it should be repaired or otherwise the ring will not engage properly.